Party music, dance music, and listening music customized and arranged specifically for you to meet your taste and planned party needs. Solo musicians to large ensembles will be tailored to fit perfectly. And musical memories will be created.

Long standing reputation of the Lester Lanin (world renown) brand: Our musicians have the best training, and have earned their reputation as full-time musicians in NY City doing studio work, Broadway, and concertizing with major pop and jazz artists. Music Director Spencer Bruno and his production staff insure your party is an affair to remember with the very best in your favorite live music genre.

We work with you to plan your event music. Depending on the occasion, we may suggest a solo piano, guitar or harp, a duo, trio, a small combo, or full orchestra. We guarantee you and your guests will rave about our music! 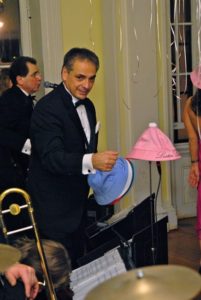 From classical to contemporary club dates, Woodwind doubler Spencer Bruno is the executive director and owner of the Lester Lanin Orchestra, the top society band. Spencer worked with Lester Lanin himself since 1990 and had the distinct honor of taking over the business after Lanin’s passing in 2004.

Spencer continues to bring quality contemporary and classic pop music to the to all event types. 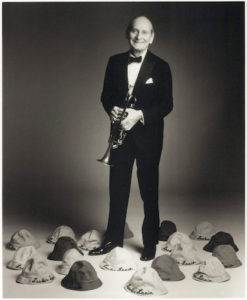 In 1930, Lanin was hired to play at a gala for Barbara Hutton, and the event garnered so much press in New York newspapers that it made Lanin a star as well as the young heiress. Lanin became a major star of the dance music world, and was hired worldwide to play for kings and queens, in addition to a recurring invitation to play at White House inaugural balls from the Eisenhower administration to the Carter administration.[1] Lanin was managed for much of his career by New York socialite music promoter Al Madison.

Famous for long, smooth medleys, Lanin’s popularity increased upon the advent of the LP era. Starting with Epic Records in the middle of the 1950s, he recorded a string of albums for several labels, many of which hit the US Billboard 200. He continued performing well into the 1990s. In 1999 Lester Lanin played himself in the black-and-white film comedy Man of the Century, where he was the favorite musician of lead character Johnny Twennies. Lester Lanin died at age 97 in 2004.

Lester Lanin Music was featured on The CW’s Gossip Girl, TV’s one-hour drama about the scandalous lives of Manhattan’s elite!